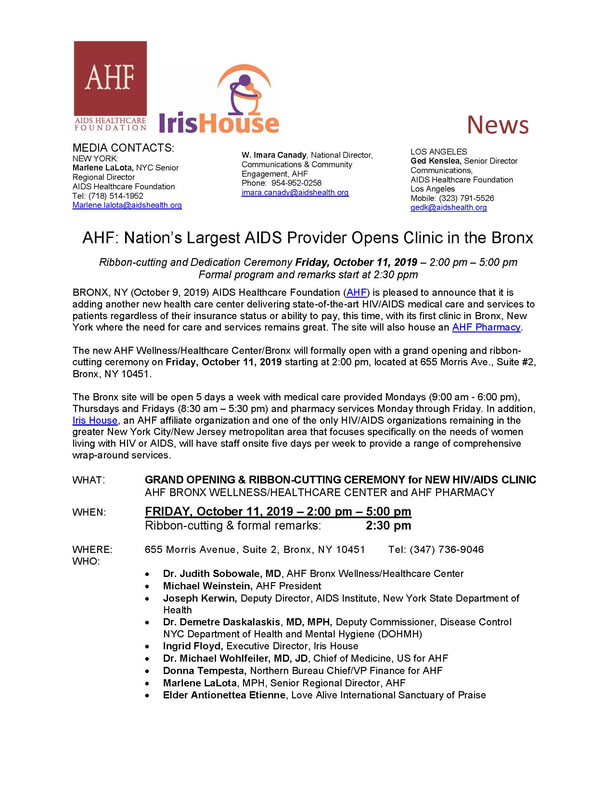 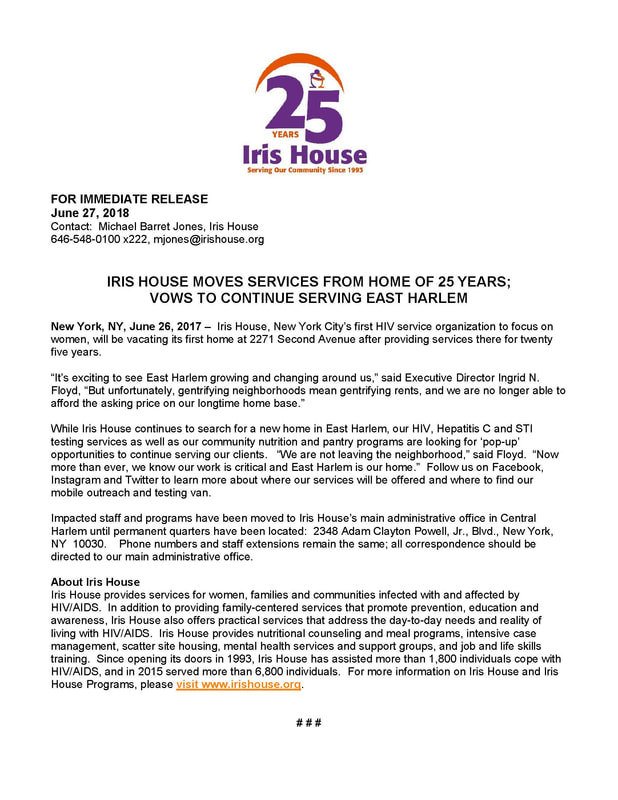 On June 18, Iris House client and peer educator Linda M. joined nearly a hundred activists on the steps of New York City Hall to ask NY Mayor Bill DiBlasio to match New York State's commitment to Ending the Epidemic.  Here is the text of her remarks above:

Good morning.  My name is Linda M., and I am a client and peer educator at Iris House, a 22 year old organization founded to support women of color living with HIV.  I am here today on behalf of women like me, and thousands more who cannot speak for themselves, to ask nicely and then to demand that Mayor DiBlasio include in his budget the New York City Council’s addition of ten million dollars to match New York State’s contribution towards the Ending the Epidemic Initiative set forth by the Governor in April.

With 80% of New York State’s HIV cases within the borders of New York City, matching the state is the LEAST our City should do.  New York City is ground zero of this epidemic in the United States, and as a community, need to come together and take the steps necessary to show our leadership and give the rest of this country some hope. Our community came together and demanded a task force to address this issue and we got it.  63 of our leaders, including Iris House executive director Ingrid Floyd, came together, listened to their clients, listened to their front line workers, listened to medical professionals and put together a list of recommendations.

Ideas are great, Mr. Mayor, but we need money to make them happen. A blueprint is a great start, Mr. Mayor, but just like you can’t build a building from its blueprint without money, we can’t build this initiative without money either. Ten Million Dollars.  It sounds like a lot, but that’s less than a dollar and a quarter for every person living in New York City, and here’s mine.  Ten Million Dollars.

It sounds like a lot, but it barely registers against the one hundred and seventy BILLION dollars traded on the New York Stock Exchange EVERY DAY, but you have to get that from them. Ten Million Dollars.  It sounds like a good start to me.

This blueprint will help my friends and I eat, sleep, get to our doctors, and have peer support.  It will help find people who don’t know their HIV status – and we all have one – and learn what it is.  It will help young men and women who depend on survival sex for basic necessities have protections in place to help keep them HIV negative, or connect them to care if they’re positive.

Our demands are simple:  meet or exceed the state’s commitment for ten million dollars in funding next year, and keep meeting it until we End this Epidemic.  Mr. Mayor, Madame Speaker, honorable members of New York City Council, my name is Linda Malloy, and I don’t like being HIV positive, but knowing that you have the power to help me, to help my sisters in the struggle, and help my daughters and granddaughters from needing to worry about the struggle is why I come to you today.  Thank you.